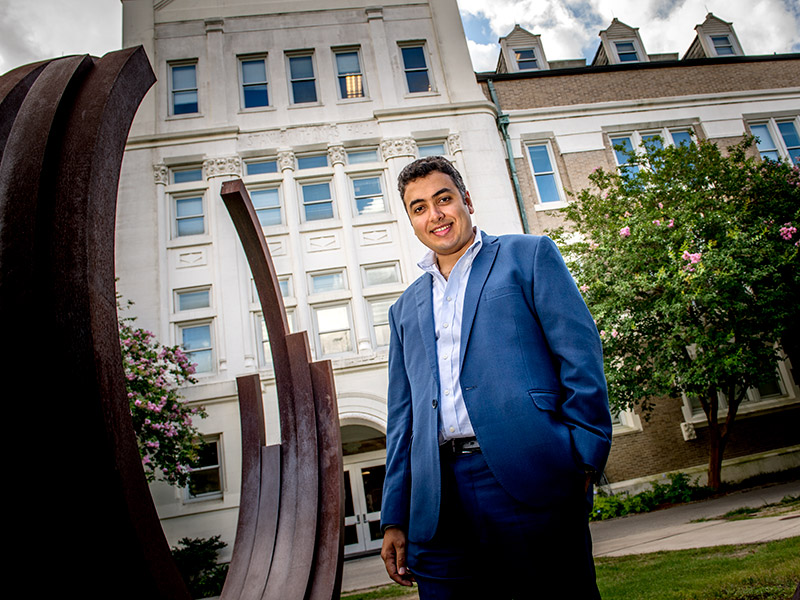 A team from the Tulane University School of Science and Engineering has developed a new family of two-dimensional materials that researchers say... more

An award-winning Tulane University researcher has led a team in discoveries that could result in significantly faster charging electric vehicles and portable devices such as cell phones and laptops.  The team, led by Michael Naguib, the Ken & Ruth Arnold Early Career Professor in Science and... more

Robert Johnson, who is receiving a Bachelor of Science from the School of Science and Engineering, with a double major in engineering physics and mathematics and a minor in music, embodied the “work hard” mentality, but learned throughout his time at Tulane to enjoy the journey and connections with... more

From Ecuador to the streets of New Orleans, Tulane engineering has no borders Apr 07, 2021 Barri Bronston

For the past five years, the Tulane chapter of Engineers Without Borders has been working on a water-access project for Laquigo, an Ecuadorian village where residents typically get much of their water from ditches. The group had planned to spend part of the summer of 2020 in Laquigo, working on the... more

Tulane University’s School of Science and Engineering has been awarded a $1 million grant from the W. M. Keck Foundation to do what no physicist has ever done before: see through opaque matter using superoscillations of light in a time-domain spectroscopy lab. That phrase might be difficult for the... more

What if a material could be made to mimic another material? That’s a challenge that Tulane physicists Gerard McCaul, a postdoctoral researcher, and Denys Bondar, assistant professor of physics and engineering physics, tackled, along with co-authors, in two papers recently published in Physical... more

Meghan Bush, an engineering physics senior at Tulane University, would like to work at NASA one day, and if her recent experience at the NASA Glenn Research Center in Cleveland is any indication, NASA would be lucky to have her. Bush, interning in the Photovoltaic and Electrochemical Systems Branch... more

A Tulane team selected to compete in the APT/PBS reality show “Make48” may take home a top prize. But you’ll have to tune in to see just what the team invented and where it placed out of 12 national collegiate teams. Billed as the “world’s fastest invention competition,” “Make48" is a MakerSpace-... more

A Tulane University materials physics and engineering scientist is one of only 10 scientists being honored nationally by the U.S. Department of Energy. Michael Naguib, an assistant professor in the Tulane School of Science and Engineering, is the winner of a Ten at Ten Award  from the energy... more

A Tulane University researcher is leading a U.S. Department of Energy project to develop a hybrid solar energy converter that generates electricity and steam with high efficiency and low cost. Utilizing an approach that more fully captures the whole spectrum of sunlight, the project generates... more

Daniel Rees, a graduate student in the Bioinnovation IGERT program, loads samples into an aggregation rate generator (ARGEN) instrument in the Center for Polymer Reaction Monitoring and Characterization (PolyRMC). Rees is working under the supervision of physics professor Wayne F. Reed to... more

A recent discovery by a team of researchers led by Tulane University advances fundamental knowledge that could one day lead to more energy-efficient computers, televisions, cellphones and other electronics. The researchers’ discovery of a new magnetic topological semimetal is featured in the latest... more

Angel Allen has a long way to go before she has to decide on a career path. But if you ask her now, the rising eighth-grader at Paul Habans Charter School will tell you that she wants to be an engineer. She wants to design cars that are powered by wind energy, and hopes her love of math and science... more

On day one of the General Electric (GE) Girls summer program hosted by Tulane University, 13-year-old Ronae Clayton had her future plans all lined up. “I’m going to be a five-star chef and own a restaurant,” she said. By day four of the weeklong camp, Clayton’s plans had become fuzzy. She knew what... more

Terry McAfee, a post doc researcher in the physics department, prepares to start the Automatic Continuous Online Monitoring Polymerization system in the lab of Professor Wayne Reed on Friday in the Merryl and Sam Israel, Jr. Environmental Sciences Building. The system, also known as ACOMP,... more

Students have a blast with truss-busting competition Apr 20, 2017 Alicia Jasmin

Students enrolled this semester in the course Statics experienced a creative way to analyze the effects of force: They designed and built trusses, or frameworks, as part of a competition to see who could design the lowest weight structure that bears the most weight. To prepare for the “truss-... more

If a student can dream it, they can create it thanks to the Tulane University MakerSpace, a student-run workshop that offers accessibility to laser cutters, 3-D printers and other design tools. The workshop caters to the university’s artists, engineers, craftspersons, makers and kinesthetic... more

At the 11th annual School of Science and Engineering (SSE) Research Day on Thursday (April 6), the college presented its Outstanding Researcher Award to Zhiqiang Mao, the Nicholas J. Altiero Professor in the Department of Physics and Engineering Physics. Mao’s research focuses on quantum materials... more

The Tulane School of Science and Engineering is accepting applications for a summer undergraduate research opportunity on Tulane’s uptown campus. The Summer Materials Research at Tulane (SMART) program is a 10-week multidisciplinary research experience for undergraduates incorporating the... more

The Tulane School of Science and Engineering has begun a new PhD program in materials physics and engineering and is accepting applicants for the 2017-18 academic year.  Doug Chrisey, the Jung Professor of Materials Engineering, said the program is the first materials engineering graduate program... more

The Tulane School of Science and Engineering is embarking on a new curriculum that will include certificate programs in electrical, mechanical, materials, and computational engineering. Under the program, students majoring in engineering physics may choose one of the four concentrations, enabling... more

The National Science Foundation has awarded a group of 14 Louisiana and Mississippi researchers – including four from Tulane University – up to $6 million to develop tools that will help strengthen the regional workforce and broaden opportunities in science, technology, engineering and mathematics... more