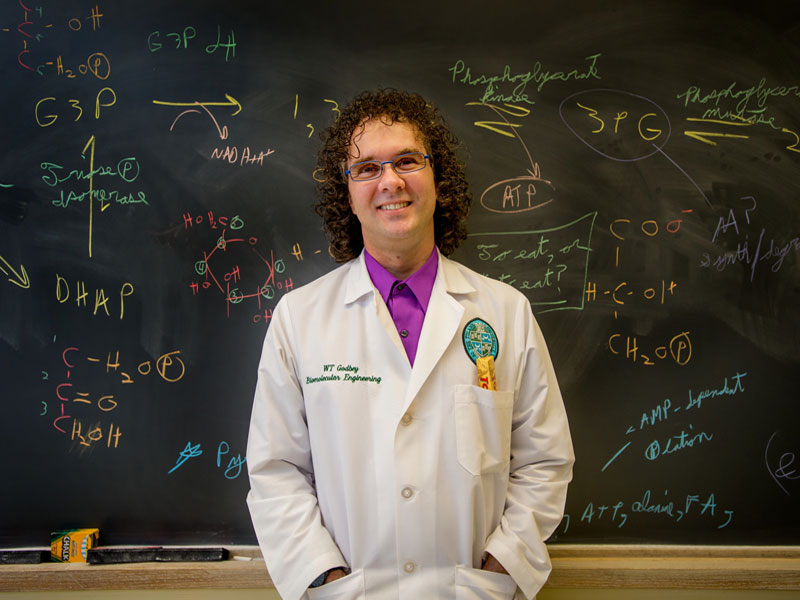 W T. Godbey received his B.S. in Mathematics from Southern Methodist University in 1988. After a successful period that involved starting his own software design and development company in Dallas, Texas, he joined the fields of science and engineering and earned his Ph.D. as a National Science Foundation Graduate Fellow from the Institute for Biosciences and Bioengineering at Rice University in 2000. From 2000-2003 he was a postdoctoral fellow at Children’s Hospital, Boston and Harvard Medical School. He joined the Tulane faculty in 2003.

One major project in the Godbey laboratory is focused on the treatment of an entire class of cancers via expression-targeted gene delivery. The delivered DNA in this application acts as a "smart gene" to selectively cause the destruction of specific cancer cells while having little or no effect upon healthy, untransformed cells. This method is showing great promise as a possible treatment for many conditions such as bladder, colon, and prostate cancers.

Other projects include the merging of the fields of molecular and cell biology with engineering to yield cells that are receptive to artificial external signals. Following the administration of an external, user-controlled signal, the engineered cells are to respond in a predetermined way that might include the production of specific factors or an altered behavior such as enhanced mobility. Such engineered cells are excellent candidates for seeding onto biodegradable scaffolds. Over time, these scaffolds would mature into implants suitable for eventual implantation into waiting patients.

Godbey WT, Zhang X, and Chang F. The Importance of and a Method for Including Transfection Efficiency into Real-time PCR Data Analyses. Biotechnol Bioeng. (2008) 100: 765-772 *Spotlighted by the journal*

Godbey WT. An Expansion of Realtime PCR into the Realm of Gene Delivery. Biotechnol Bioeng (2008) 100: fmvii.