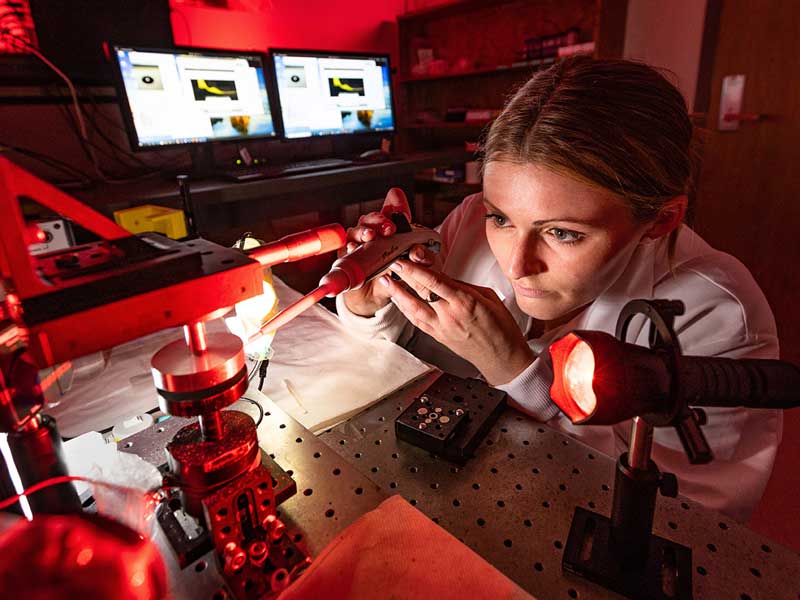 Could some of those who died from COVID-19 and other infectious diseases have been saved by a diagnosis that predicts how severe their cases will... more

Tulane University professor Chenzhong Li, PhD, has been named a 2021 fellow by the National Academy of Inventors (NAI), an honor that is the highest professional distinction accorded solely to academic inventors. Li, professor of Biomedical Engineering and Biochemistry at Tulane University School... more

Beloved professor gets gift of a lifetime from former student Nov 17, 2021 Barri Bronston

Carolyn Bayer, an assistant professor of biomedical engineering at Tulane University School of Science and Engineering, is among 23 early career scientists to win funding for research to accelerate the development of the next generation of imaging technologies. The funding, a total of $1.1 million... more

In 2019, nearly 50,000 people in the United States died from opioid overdoses, bringing the total of number of deaths from the opioid crisis to half a million over the past 10 years, according to the U.S. Centers for Disease Control. Michael J. Moore, a professor of biomedical engineering at Tulane... more

Dylan Lucia is one of the student Commencement speakers for 2021. His speech will be part of the Unified Commencement Ceremony on Saturday, May 22. Last year, Dylan Lucia was preparing to graduate from the School of Science and Engineering (SSE) with a bachelor’s degree when the pandemic began. He... more

Michael J. Moore, a professor of biomedical engineering at Tulane University, has been named chairperson of a National Institutes for Health study section. Moore’s one-year appointment as chair of the Bioengineering of Neuroscience, Vision and Low Vision Technologies (BNVT) Study Section of the... more

A team of Tulane University biomedical engineering students has been selected as a semi-finalist in the 11th Annual Undergraduate Global Health Technologies Design Competition at Rice University. Team CerFix will join 35 student teams from national and international universities as they present low... more

In 2019, then Tulane University seniors Hannah Eherenfeldt and Benjamin Knapp won the Novel Tech Challenge for their medical simulation startup, ReSuture. The company enables medical students and surgical residents to learn vascular surgical skills in a controlled and monitored environment. Their... more

When four biomedical engineering students from Tulane University were chosen for an internship at the Southeast Louisiana Veterans Health Care System (SLVHCS) last summer, they were tasked with identifying an unmet clinical need – something that would not only save money for the agency but improve... more

The National Science Foundation has awarded a $250,000 grant to BioAesthetics Corp. to develop a new advanced wound-care product for treating bed sores or pressure ulcers. The product will be tested at Tulane University. The Small Business Technology Transfer (STTR) Phase I award will fund initial... more

Kristin S. Miller, an associate professor of biomedical engineering at Tulane University, is the winner of the 2021 ASME Y.C. Fung Early Career Award for outstanding contributions to the field of bioengineering through research to advance understanding of the female reproductive system. The award... more

Hepatocellular carcinoma is a common liver cancer with poor prognosis. With symptoms not discovered until later stages, it is considered the most fatal malignant liver cancer worldwide. But a research team in the Tulane University Department of Biomedical Engineering is developing a novel cancer... more

A Tulane University researcher has received a grant that will support the development of new imaging methods to improve the treatment of preeclampsia. Carolyn Bayer, an assistant professor of biomedical engineering, says the five-year $1.57 million grant from the Eunice Kennedy Shriver National... more

A Tulane University researcher is joining more than 40 universities from across the United States in looking for ways to improve treatment of chronic pain and ultimately achieve long-term recovery from opioid addiction. Michael J. Moore, professor of biomedical engineering in the Tulane School of... more

A Tulane team selected to compete in the APT/PBS reality show “Make48” may take home a top prize. But you’ll have to tune in to see just what the team invented and where it placed out of 12 national collegiate teams. Billed as the “world’s fastest invention competition,” “Make48" is a MakerSpace-... more

A Tulane University biomedical engineering professor will share in a $2.6 million grant to research better ways of managing acute respiratory distress syndrome, also known as ARDS, a rapidly progressive disease caused by fluid buildup in the lungs and an overwhelming inflammatory response.  With no... more

On Feb. 16, Tulane bioinnovation PhD student Samantha Kurtz was selected as the winner of the 2019 Three Minute Thesis Competition. The contest took place in Knoxville, Tennessee, at the annual meeting of the Council of Southern Graduate Schools (CSGS). As its name suggests, participants have... more

An imaging technique used to detect some forms of cancer can also help detect preeclampsia in pregnancy before it becomes a life-threatening condition, a new Tulane study says. Preelcampsia is a hypertensive disorder that accounts for 14 percent of global maternal deaths annually and affects 5 to 8... more

Wound-healing technology developed at Tulane by former biomedical engineering graduate students blasted off on the SpaceX Dragon Cargo Ship for experiments on the International Space Station. Click the image below to learn more about their project's journey into outer space.

They delighted in everything Peru had to offer, from fishing on the Amazon to bird-watching in the rainforest to surfing on the Pacific. But this was anything but a vacation. For Siyang Hu, Claire Sentilles, Shreya Gunda, Rachel Russell and Ellie Pepperell, seniors in biomedical engineering at... more

A Tulane University researcher has won a $1.6 million grant to develop a tool that could lower tumor recurrence in cancer patients, especially those with prostate cancer. J. Quincy Brown, associate professor of biomedical engineering, will join forces with what he calls an interdisciplinary “dream... more

Tulane University has joined a consortium of 24 academic institutions to create a new hub to accelerate the commercialization of life sciences research and biomedical innovations. The National Institute of General Medical Sciences, a division of the National Institutes of Health, awarded a $3.5... more

When Tulane University alumnus Luke Hooper entered his wireless game Lumen into the 2018 Edison Awards competition – which honors the most innovative new products, services and business leaders in America – he did so knowing that his chances of winning were probably nil. The game wasn’t on the... more

A team from Tulane University is one of 12 collegiate teams nationwide selected to compete in the APT/PBS reality show “Make48.” The competition will be taped Aug. 10-12 at the Stanley Black and Decker Innovation Lab near Baltimore. Billed as the “world’s fastest invention competition,” “Make48” is... more

Two Tulane scientists and a graduate student are among 40 national winners of the 2017 Inspiring Leaders in STEM Award, which honors professionals from underrepresented groups who have made a difference in the fields of science, technology, engineering and mathematics (STEM). The winners –... more

Dylan Lawrence, a graduate student in biomedical engineering, adjusts a preclinical, high resolution ultrasound system modified to generate photoacoustic images of oxygen saturation of the placenta. His research, in the laboratory of Dr. Carolyn Bayer, seeks to improve the diagnoses and treatment... more

An interdisciplinary team from Tulane University’s bioinnovation and biomedical engineering departments within the School of Science and Engineering has won the International Business Model Competition (IBMC) in Mountain View, California, receiving a first-place prize of $30,000. Representing the... more

Students have a blast with truss-busting competition Apr 20, 2017 Alicia Jasmin

Students enrolled this semester in the course Statics experienced a creative way to analyze the effects of force: They designed and built trusses, or frameworks, as part of a competition to see who could design the lowest weight structure that bears the most weight. To prepare for the “truss-... more

If a student can dream it, they can create it thanks to the Tulane University MakerSpace, a student-run workshop that offers accessibility to laser cutters, 3-D printers and other design tools. The workshop caters to the university’s artists, engineers, craftspersons, makers and kinesthetic... more

The Tulane School of Science and Engineering is accepting applications for a summer undergraduate research opportunity on Tulane’s uptown campus. The Summer Materials Research at Tulane (SMART) program is a 10-week multidisciplinary research experience for undergraduates incorporating the... more