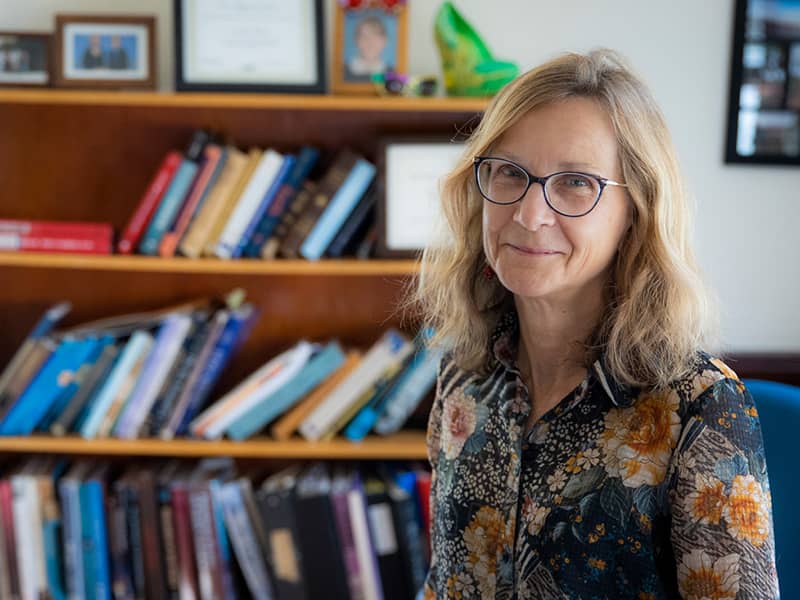 Cynthia Ebinger, the Marshall-Heape Professor in the Tulane University Department of... more

Colin Jackson, a researcher in the Tulane University School of Science and Engineering, has won a National Science Foundation Early Career Award to further his research on the chemistry of planets. The $700,000 award will enable Jackson and his research team to conduct experiments to investigate... more

Geologist Cynthia Ebinger, a professor in the Tulane University School of Science and Engineering, has won the 2021 George P. Woollard Award from the Geological Society of America. Ebinger, the Marshall-Heape Chair in Geology in the Department of Earth and Environmental Sciences, was honored for... more

Nicole Gasparini, a geologist in the Tulane University School of Science and Engineering, has won numerous awards during her professional career, but the latest one might be the most satisfying. Gasparini has been named the winner of the 2021 Marguerite T. Williams Award, given annually by the... more

A Tulane University planetary scientist is one of 30 scientists from across the United States and Europe who will be part of a NASA mission to Venus, Earth’s nearest neighbor. Jennifer Whitten, an assistant professor in the Department of Earth and Environmental Sciences, will serve as associate... more

Engineering of the Mississippi River has kept carbon out of the atmosphere, according to new study Mar 23, 2021 Barri Bronston

A new study co-authored by a Tulane University geoscientist shows that human efforts to tame the Mississippi River may have had an unintended positive effect: more rapid transport of carbon to the ocean. The paper, published in AGU Advances, describes the work of a team of researchers who set out... more

Scientists from Tulane University are part of an international team of researchers whose study of the 2018 eruption of the Sierra Negra volcano in the Galápagos Islands provides vital information about future volcanic activity on the islands. Their most recent research was published this month in... more

The Tulane University Department of Earth and Environmental Sciences has been accepted into the AGU Bridge Program, an initiative designed to recruit and retain underrepresented students who are applying to geoscience graduate schools. AGU (American Geophysical Union) is the nation’s largest... more

A Tulane University researcher is part of team of scientists evaluating the hazards associated with submarine landslides beneath the Indian Ocean that are associated with the East African Rift System, a seismically and volcanically active series of continental fractures. Geophysicist Cynthia... more

Diamonds, those precious, sparkling jewels, are known as the hardest materials on Earth. They are a high-pressure form of carbon and found deep in the ground. While diamonds are commonly thought of as hard and stable, carbon from about 100 miles beneath the African plate is being brought to... more

Given the present-day rate of global sea-level rise, remaining marshes in the Mississippi Delta are likely to drown, according to a new Tulane University study. A key finding of the study, published in Science Advances is that coastal marshes experience tipping points, where a small increase in the... more

The massive Thwaites Glacier, on the continent of Antarctica, is more than 7,000 miles from Blessey Hall, the Tulane University building where geologist Brent Goehring teaches such classes as Isotopes in the Environment, Geologic Dating Methods and Physical Geology. But the Thwaites Glacier— a... more

The geosciences field in the U.S. is historically dominated by white men, but in recent years, there have been significant gains in terms of gender balance. For example, the National Science Foundation’s 2018 survey reported a 55.8% increase in women earning geoscience doctorate degrees since 2009... more

A new study of nearly every delta on the planet shows how river delta shapes and sizes around the world are changing due to human activity – both for the good and bad. The study, carried out by a Dutch/American team that includes present and former Tulane University researchers, demonstrates how... more

Having never taught a Tulane service learning class, where students apply classroom knowledge to assist community organizations or address societal problems, geologist Nicole Gasparini and her students were understandably tense.  “On my way out the door to do outreach, and I’m very nervous,” ... more

A Tulane University researcher is among nearly 100 scientists and support staff from the United States and the United Kingdom heading to Antarctica this week as part of a five-year quest to understand the Thwaites Glacier, the surrounding ocean system and their future contribution to global sea... more

In 2013, residents of Cow Island, located in the southwestern Louisiana parish of Vermilion, successfully sued a pharmaceutical company to pay $5 million for cleanup of arsenic-contaminated soil and water. The suit, which stemmed from a local priest’s battle with cancer, claimed that the arsenic... more

A new Tulane University study questions the reliability of how sea-level rise in low-lying coastal areas such as southern Louisiana is measured and suggests that the current method underestimates the severity of the problem. The research is the focus of a news article published this week in the... more

As a research intern in the Tulane School of Science and Engineering, Makiyah Cormick, a senior at the New Orleans Charter Science and Mathematics High School, worked closely with scientists to analyze seismic data from around the world. He was especially interested in the possible causes of an... more

A national report released Wednesday on the future of the Gulf Coast draws heavily on the work of two Tulane University scientists who have spent most of their careers studying coastal systems in Louisiana and around the world. The report from the National Academies of Sciences, Engineering and... more

When searching directions using Google Maps, tagging your location on social media or requesting an Uber ride from your smartphone, you are utilizing Geographic Information Systems (GIS) — systems designed to present spatial data. Now, Tulane students can learn more about managing this type of... more

When Nicole Gasparini, an associate professor of geology at Tulane University, read the application requirements for the 2018 Oliver Fund Scholars Award, she knew that her research in landscape reorganization would be a perfect fit. The annual $40,000 award, given every two years, is designed to... more

Karen Johannesson, a professor of geochemistry and chemical hydrogeology in the Department of Earth and Environmental Sciences, will receive the Outstanding Researcher Award Thursday, April 12, during the 12th annual School of Science and Engineering (SSE) Research Day. A pioneer in the field of... more

Although river diversions that bring land building sediment to shrinking coastlands are the best solution to sustaining portions of the Mississippi Delta, a new Tulane University study concludes that the rate of land building will likely be dwarfed by the rate of wetland loss. The study, published... more

Near the eastern coast of Africa, a tectonic rift in Earth’s ancient crust is yielding clues about the effects of molten rock, or magma, on continental breakup. Cynthia Ebinger, holder of the Marshall-Heape Chair in Geology in the School of Science and Engineering at Tulane University, studies tiny... more

A Tulane University geologist is among a team of scientists studying an ancient Canadian ice sheet to determine if its collapse could be a preview of future climate change. Brent Goehring, an assistant professor in the Tulane Department of Earth and Environmental Sciences, conducted the study of... more

A Tulane University geologist has concluded a study on climate change, which will help develop climate models that simulate the effects of climate change and the Earth’s response to it. The study by co-author Kyle Straub, an associate professor in the Department of Earth and Environmental Sciences... more

East Africa may be a long way from the Crescent City, but it is top of mind for Tulane PhD student Sarah Oliva, who is studying data from volcanoes and earthquakes in that region. Her goal is a better understanding of how a 3,000-kilometer long deep valley — the East African rift system — formed.... more

Many studies say capturing Mississippi River sand through diversions is key to rebuilding Louisiana’s vanishing coast. But a new study in the open-access journal Earth Surface Dynamics of an old levee breach, or crevasse, along Bayou Lafourche indicates that mud, the most plentiful sediment type... more

Without major efforts to rebuild Louisiana’s wetlands, particularly in the westernmost part of the state, there is little chance that the coast will be able to withstand the accelerating rate of sea-level rise, a new Tulane University study concludes. The study by researchers in Tulane’s Department... more

For Tulane professor Kyle Straub, a recent sabbatical meant an opportunity to explore one of the most intriguing places on earth. Last year, Straub, associate professor in the Department of Earth and Environmental Sciences, was invited by colleagues at ExxonMobil to join a research group at their... more

Jordan Adams is no stranger to adventure. Adams, a doctoral student in the School of Science and Engineering at Tulane, has worked in the mountains of Appalachia, the forests of Arizona and the peninsulas of Hawaii. She’s also worked right here in Louisiana, studying the hydrology of our very own... more