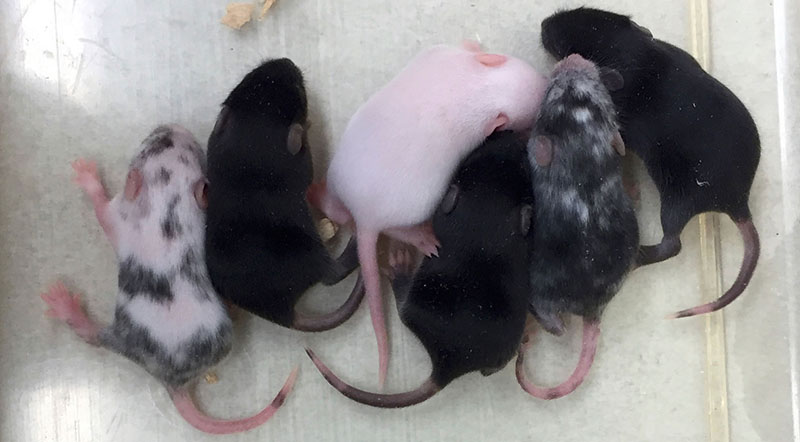 The Tulane Transgenic Core Facility was established in 2001 in order to provide a service for the Tulane University community by supplying the demand for the creation of transgenic and knockout mice. These mice are essential for research in the function of genes.

The "loss-of-function" approach to study gene function has been utilized extensively. The most commonly used and the most informative "loss-of-function" approach is to study the consequence of eliminating a gene in a model system, such as mouse. This technique, termed gene "knockout," has been well established in the mouse. It utilizes a cellular process called homologous recombination to replace the endogenous gene with a modified nonfunctional one. Analysis of the "knockout" mouse phenotype can allow us to deduce the function of this gene in a biological process. In addition, it offers a genetic toll or model to study complex genetic pathways during development or disease processes.

Investigators who need unique transgenic and knockout animals can contact the facility and arrange for the creation of these animals. The facility is housed in Percival Stern Hall on Tulane's Uptown campus and provides its services for a fee to Tulane researchers at all campus locations. The facility can make transgenic mice using DNA constructs, knockout mice from targeted ES cells, genetically modified mice and rats using CRISPR/Cas9, and convert the health status of mice to specific pathogen free. In vitro fertilization (IVF) and cryopreservation services are also available.

Cryopreservation of mouse lines is essential for researchers using transgenic or mutant mice because it allows them to preserve valuable mouse lines for future use without the need for long-term maintenance of breeding colonies. There are several benefits to storage of mouse lines. Cryopreservation can reduce the cost of animal care, save space in the vivarium and simplify importing and exporting mouse lines. Since frozen cells remain unaffected by mutation, genetic drift or disease, cryopreservation also minimizes the risk of strain loss due to contamination, disease, breeding problems and disasters. In-vitro fertilization (IVF) is a valuable tool for the rapid expansion of mouse lines, the recovery of frozen sperm, and the rescue of lines experiencing reproductive problems. IVF can also be used in concert with cryopreservation and rederivation.