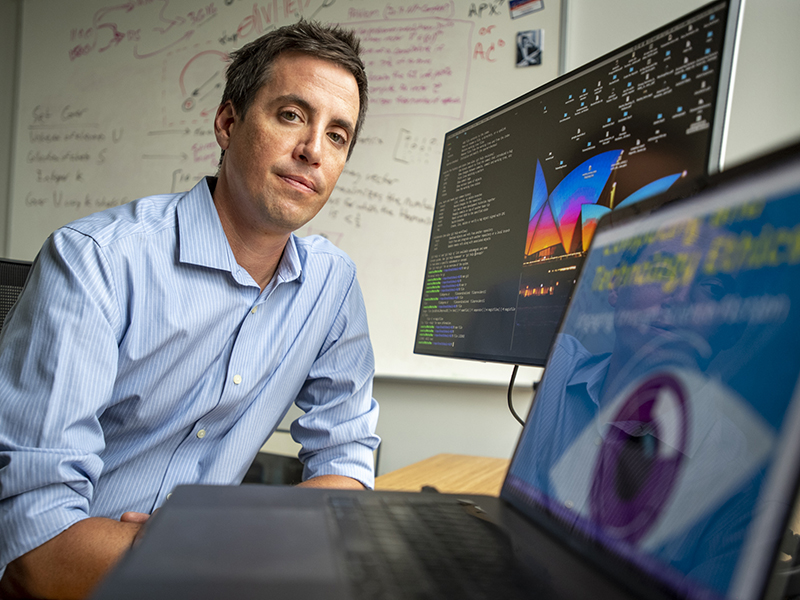 Featured Story
AI is smart — can we make it ethical, too?

Supercomputers are so powerful that the datasets they can produce —huge troves of information needed by scientists, doctors, business leaders, government officials and others — are too massive to easily share or study. A Tulane University computer scientist has been awarded $750,000 over five years... more

Twenty students from the Newcomb-Tulane College Class of 2022 were awarded membership to the William Wallace Peery Society, the university's top academic honor for undergraduates. It recognizes exceptional seniors who represent the top 1% of their graduating class for academic achievement. The... more

Anyone who’s spent much time on social media knows that the algorithms are always watching. These machine learning systems know what we like, what we consume online and what we may want to buy — sometimes even before we do — based on the digital footprints we all leave online. But these highly... more

Artificial intelligence experts from Tulane University and the University of Maryland have received a Google Scholar Research Award to develop better ways of promoting diversity and fairness in a variety of pipeline and selection problems, including hiring, graduate school admission and customer... more

Tulane University has been awarded a share of a $20 million National Science Foundation grant to transform research and education in advanced manufacturing and materials throughout Louisiana. The award establishes the Louisiana Material Design Alliance (LAMDA) which, in addition to Tulane, includes... more

Tulane to use artificial intelligence to study how nation’s schools are responding to coronavirus Apr 24, 2020 Sharon Lurye

The U.S. Department of Education’s Institute of Education Sciences has awarded the National Center for Research on Education Access and Choice (REACH) at Tulane University a $100,000 contract to collect data from approximately 150,000 school websites across the country to see how the nation’s... more

As the role of artificial intelligence (AI) expands in daily life, so too does the need to engage in research into how to most effectively build AI technologies that align with positive values and ethics. That is one of the areas that Tulane University researcher Nicholas Mattei specializes in and... more

A flyer advertising a Python coding workshop on the uptown campus changed the career trajectory for one first-year student at Tulane University. “I had never coded in my life, but I thought that it sounded interesting so I took a chance and went,” said Tatiana Derouen, who is now a Tulane senior... more

The advent and consequences of superhuman intelligence will be the subject of a panel discussion Feb. 1 from 6 to 8:30 p.m. at Freeman Auditorium, located in the Woldenberg Art Center on the uptown campus of Tulane University. The discussion is the opening program of the Conference on Artificial... more

Tulane University professor Michael Mislove has received a $3.67 million grant from the U.S. Air Force Office of Scientific Research to help develop cutting-edge technology related to quantum computing. The goal of the project is to develop tools and related methodologies for designing and... more

Expert engineers from one of the world’s most influential technology companies encouraged Tulane students to pursue careers in data science and artificial intelligence Wednesday during the Intel Artificial Intelligence (AI) Workshop held on the uptown campus of Tulane University. The event was... more

Does the notion of artificial intelligence have you conjuring up Hollywood’s images of cyborgs, posing as humans, coming back from the future to change the fate of the world? Or is the mere concept of AI (as scientists refer to it) emblematic of a world in which sentient computers like HAL, from... more

Computer science at Tulane University, eliminated after Hurricane Katrina but brought back in 2012, has taken another leap forward with the creation of a doctoral program that aims to produce leading researchers and further prepare computer scientists for the job market. “From the outset, our... more

Rules of the road for self-driving cars are more than staying in lanes Jan 19, 2017 Mary Ann Travis

It’s the stuff of science fiction and futuristic film: Self-driving vehicles are taking to the roadways in droves. With the proliferation of vehicular automation, the role of computer scientists like Brent Venable, associate professor of computer science at Tulane University, is expanding. Computer... more

It’s an industrywide problem: Fewer women than men practice computer science. Fast Company reported in March 2016 on a new study by the financial software and data firm Smart Asset that U.S. women make up only 26.5 percent of the tech workforce. And women earn, on average, just 85 percent of what... more