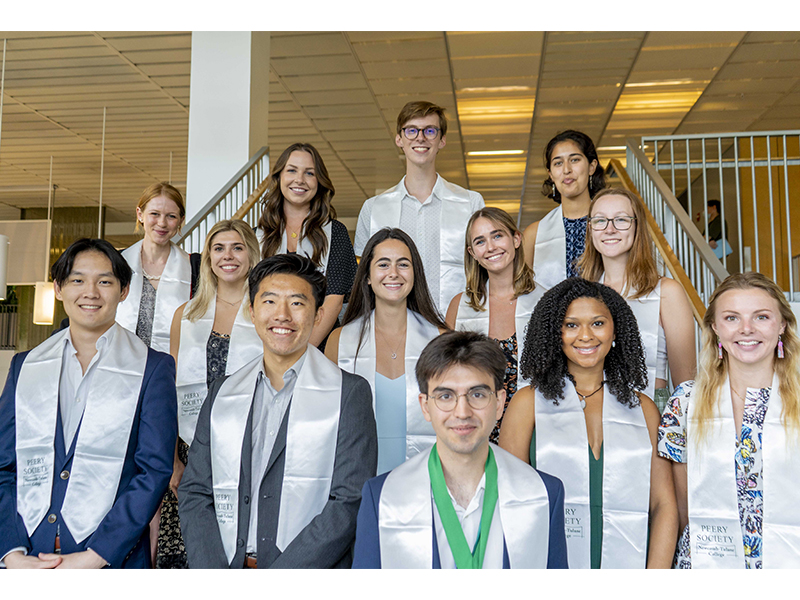 Twenty students from the Newcomb-Tulane College Class of 2022 were awarded membership to the William Wallace Peery Society, the university's top... more

Tulane University math professor Lisa Fauci has won a prestigious research grant from the International Human Frontier Science Program Organization (HFSPO),a non-profit organization, based in Strasbourg, France, that funds basic research in life sciences. Fauci and a team of researchers from the... more

In honor of Hispanic Heritage Month, SIAM is recognizing the achievements of Hispanic American mathematicians throughout September and October. Dr. Ricardo Cortez is the Pendergraft William Larkin Duren Professor of Mathematics and Director of the Center for Computational Science at Tulane... more

Many observations of the statistical properties of fluids in physically relevant settings agree with the analytical theories of turbulence that stem from the engineering and physics communities; these theories combine various reasonable approximations with axioms that researchers derive from... more

Robert Johnson, who is receiving a Bachelor of Science from the School of Science and Engineering, with a double major in engineering physics and mathematics and a minor in music, embodied the “work hard” mentality, but learned throughout his time at Tulane to enjoy the journey and connections with... more

Dear SSE Community, All of us have been deeply saddened by the recent passing of our friend and colleague Sławomir Kwasik, “Slawek”, Professor of Mathematics at Tulane. We would like to take a minute of your time to say a few words about the exceptional quality of Slawek’s research.... more

The School of Science and Engineering recently announced two professors as recipients of the Dean’s Hero Award, a new award that recognizes faculty members who have demonstrated exemplary service, especially during this challenging time. The Spring 2020 recipient is Ricardo Cortez, the William... more

James “Mac” Hyman, the Evelyn and John G. Phillips Distinguished Professor in Mathematics at Tulane University, is using mathematical models to better understand and predict the spread of COVID-19 and to quantify the effectiveness of various efforts to stop it.   The goal of Hyman’s work in “... more

During spring award season, each new year is an opportunity to celebrate the year’s progress and achievements. On April 4, the Tulane School of Science and Engineering (SSE) honored 2019’s outstanding alumni; on April 11, SSE continued the season by honoring mathematics Professor Mac Hyman with the... more

Much like computer models predict the paths and strengths of hurricanes, computer modeling can also be used to predict how phytoplankton move through the ocean or how artificial heart valves change the way blood flows in the heart. This is known as the fluid dynamics of swimming organisms, and it... more

Frank Tipler, Tulane professor of mathematical physics, argued on Oct. 18 against the proposition “that science alone can never answer our biggest questions” at the Oxford Union, the famous debate society founded in 1823 at Oxford University to protect free speech. The society has hosted American... more

A Thacher’s calculator, dated 1882, is on display in the lobby of the Boggs Center for Energy and Biotechnology on the uptown campus. Invented by Edwin Thacher, the instrument, also known as a cylindrical slide-rule, became a vital tool in science, engineering, commerce and business. An online copy... more

Tulane University professor Michael Mislove has received a $3.67 million grant from the U.S. Air Force Office of Scientific Research to help develop cutting-edge technology related to quantum computing. The goal of the project is to develop tools and related methodologies for designing and... more

President’s Teaching Awards go to professors of law and math May 18, 2017 Faith Dawson

Two President’s Awards for Graduate and Professional Teaching will be bestowed during Commencement 2017. The recipients are Janet C. Hoeffel, Catherine D. Pierson Professor of Law at Tulane University Law School, and Victor Moll, professor of mathematics in the School of Science and Engineering. (... more

Local comedian and New Orleans Pelicans superfan Chris Trew had a burning question: What are the Pelicans' chances of scoring big in the NBA Draft Lottery on May 16? See if you can keep up as Michelle Lacey, associate professor in the Department of Mathematics in the Tulane School of Science and... more

Jessica Conrad is wrapping up her senior year in both the Tulane School of Science and Engineering and the School of Public Health and Tropical Medicine. But the math and public health double major already has one major accomplishment on her record — her work on mathematical modeling behavior... more

The International Society for Disease Surveillance (ISDS) annually recognizes scientists and professionals for their contributions to research in biosurveillance, and this year Mac Hyman, a mathematics professor in the Tulane University School of Science and Engineering, is being honored twice.... more