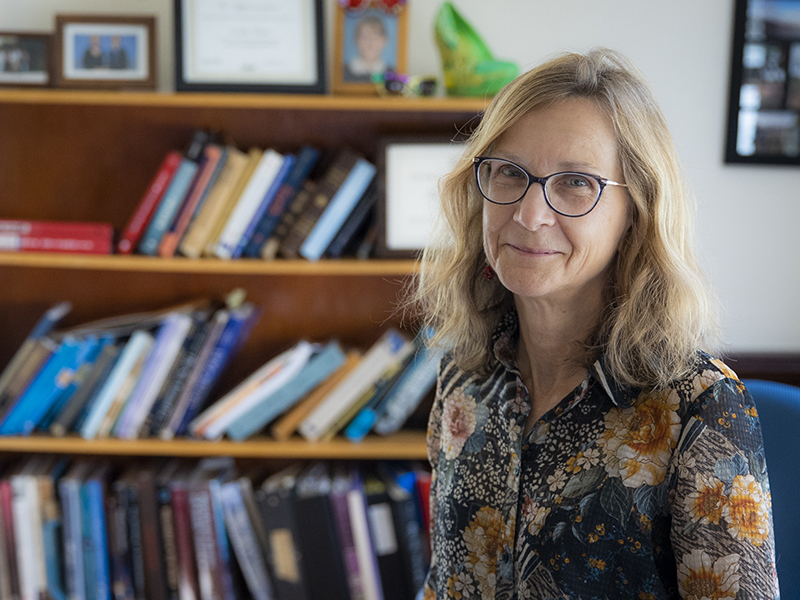 Geologist Cynthia Ebinger is one of the world’s leading experts in earthquake seismology and active tectonics. (Photo by Rusty Costanza)

Geologist Cynthia Ebinger, a professor in the Tulane University School of Science and Engineering, has won the 2021 George P. Woollard Award from the Geological Society of America.

Ebinger, the Marshall-Heape Chair in Geology in the Department of Earth and Environmental Sciences, was honored for her “outstanding contributions to geology through the application of the principles and techniques of geophysics.”

The award is presented annually by the GSA’s Geophysics and Geodynamics Division. It is named for the late George P. “Doc” Woollard, who was considered an authority on gravitational and seismological aspects of geology.

Ebinger is one of the world’s foremost experts in earthquake seismology and active tectonics, and her team of graduate and undergraduate researchers uses seismic and potential fields, signal processing and geospatial tools to probe fundamental Earth processes. Her focus is on magma fault interactions within the crust and mantle at rifts and hotspots, both active and ancient.

She has conducted much of her research on the East African Rift, and her work has led to several highly cited papers, including the "Tectonic Development of the Western Branch of the East African Rift," which was published in the Geological Society of America Bulletin and is considered the definitive study on that portion of the rift.

In addition to her numerous research projects, Ebinger has served as editor of several journals, including the Journal of African Earth Sciences, Geophysical Journal International and Basin Research and has been the president of the AGU Tectonophysics Division. She is currently chair of the AGU’s College of Fellows.

Ebinger said she was honored to receive the award, considering she never intended to be a scientist.

“Instead, I followed paths that perplexed and challenged me,” she said in her acceptance speech. “More often than not, they involved exotic travel, largely because that was the best place to study the research problem, and also for the exposure to new cultures and perspectives.”

While attending graduate school at the Massachusetts Institute of Technology, she recalls reading papers by Woollard about the importance of isostasy in gravity analyses. Isostasy is the tendency of Earth’s plates to rise and fall in response to changes in density, as with ice sheet melting and sea level rise.

“Now I share this insight with undergrad and graduate students, many of whom use gravity and isostatic analyses in their research.”