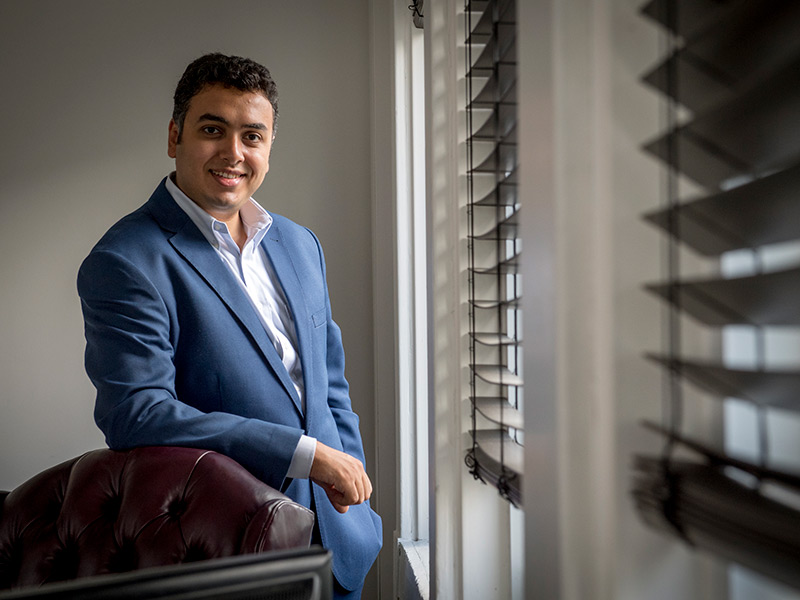 Michael Naguib, the Ken & Ruth Arnold Early Career Professor in Science and Engineering at the School of Science and Engineering, has been named to the annual list of Highly Cited Researchers for 2022 by Clarivate, a British-based analytics company and the producer for Web of Science. This is...
Grad student develops new approach to breast restoration
Mar 17, 2016 - Keith Brannon

Each year more than 230,000 women are diagnosed with breast cancer in the United States and approximately 180,000 undergo mastectomies. Nicholas Pashos, 28, a PhD candidate in the Tulane University interdisciplinary bioinnovation program, is working on a project that he hopes will one day transform...

Michelle Sanchez and her team of volunteer judges covered just about every inch of the massive Human Performance Center at the University of New Orleans during the area’s annual science fair for young students. The UNO venue is home to the Greater New Orleans Science and Engineering Fair, but it is...

Middle-school girls in the Tulane GIST (Girls in STEM) program interact at the New Life in Buried Bones workshop, asking questions and seeking knowledge about anthropology. It was one of 14 workshops offered by GIST, a program of the Tulane School of Science and Engineering, on Nov. 14 on the...

Why are people startled by the sound of a car backfiring? What causes them to turn their attention away from what they are doing and toward the location of the sound? Edward Golob, an associate professor of psychology at Tulane University, is the principal investigator on a $1.4 million, five-year...

It's not exactly Jaws, but Tulane University is hosting a unique guest—a small and very rare species of shark, nicknamed the “pocket shark.” Just five and a half inches long, the specimen is archived in the Royal D. Suttkus Fish Collection at the Tulane Biodiversity Research Institute in Belle...

Tulane University has been selected by the National Science Foundation as an NSF Innovation Corps Site, making it the focus of a three-year effort to move technology-based research into the marketplace. This effort promises to further the growth of New Orleans as a hub for careers in technology,...

Brian Mitchell, a professor of chemical and biomolecular engineering at Tulane University, has been named the Council of Graduate Schools/National Science Foundation Dean-in-Residence for 2015-16. Mitchell, who served as Tulane’s associate provost for graduate studies and research from 2006 to 2014...

Late game dramatics resulted in a 71-70 win for Tulane University women’s basketball over the University of Central Florida on Jan. 13, but another feat also took place during the game. Senior guard Jamie Kaplan hit the 500 career assists mark, becoming just the second player ever at Tulane to...

If that mockingbird won’t sing, could lead be the problem? Tulane University researcher Renata Ribeiro wants to find out by setting up bird feeders around homes throughout New Orleans as part of a yearlong project funded by the Morris Animal Foundation. Research has shown that older New Orleans...

The National Science Foundation has awarded a group of 14 Louisiana and Mississippi researchers – including four from Tulane University – up to $6 million to develop tools that will help strengthen the regional workforce and broaden opportunities in science, technology, engineering and mathematics...