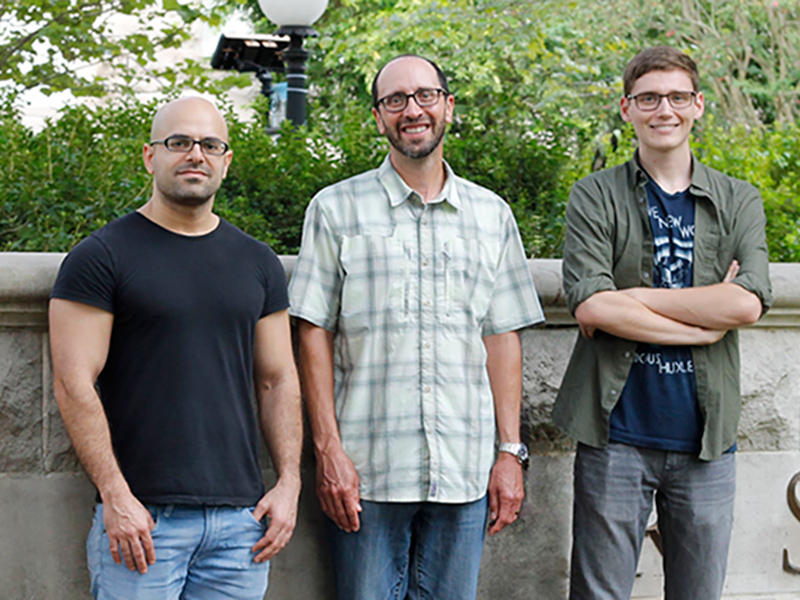 From left, Foad Kabinejadian, Joseph Bull and Jonah Harmon are part of a Tulane biomedical engineering team that is developing a novel cancer treatment for hepatocellular carcinoma, a form of liver cancer that is often fatal. (Photo, taken before the COVID-19 pandemic, is courtesy of Joseph Bull)

Hepatocellular carcinoma is a common liver cancer with poor prognosis. With symptoms not discovered until later stages, it is considered the most fatal malignant liver cancer worldwide.

But a research team in the Tulane University Department of Biomedical Engineering is developing a novel cancer treatment that is able to shrink tumors to an average of less than 3 percent of their initial size in a mouse model.

The work of Jonah S. Harmon, Foad Kabinejadian and Joseph Bull, the John and Elsie Martinez Biomedical Engineering Chair, is being featured in the September issue of APL Bioengineering and in a release by the American Institute of Physics. Harmon, the lead author, is a former PhD student of Bull’s and a recent graduate of Tulane’s Biomedical Engineering Ph.D. program, and Kabinejadian is a recent post-doctoral Fellow in Bull’s lab.

Joseph Bull, professor in the Tulane Department of Biomedical Engineering

The paper is titled  "Combined gas embolization and chemotherapy can result in complete tumor regression in a murine hepatocellular carcinoma model.”

The typical treatment for this type of liver tumor is called transarterial chemoembolization, but researchers say it is invasive and too imprecise to be a local drug delivery method.

To increase the precision, the Tulane team created a combination treatment that involves vaporizing tiny droplets of perfluorocarbon, a common organic material comprised of carbon and fluorine that is used in pharmaceuticals, anesthetics and industrial fluids. The method is called gas embolization, and while relatively new, it is the particular research area of the authors.

“By changing the treatment parameters in this paper, we were able to achieve tumor regression, and by combining our method with chemotherapy we were able to reduce regrowth following treatment,” Bull said. “Gas embolization has never been used in patients. Demonstrating that it can induce tumor regression is really new. We’re very excited about the work in this paper.”

In the gas embolization method, perfluorocarbon liquid is administered intravenously, interacting with the DOX that has been administered in the body.  DOX binds to the surface of the droplets of liquid, which are small enough to travel through capillaries and do not cause blood vessel blockage until they are vaporized. Thus, treatment can be applied locally at the specific site of the tumor.