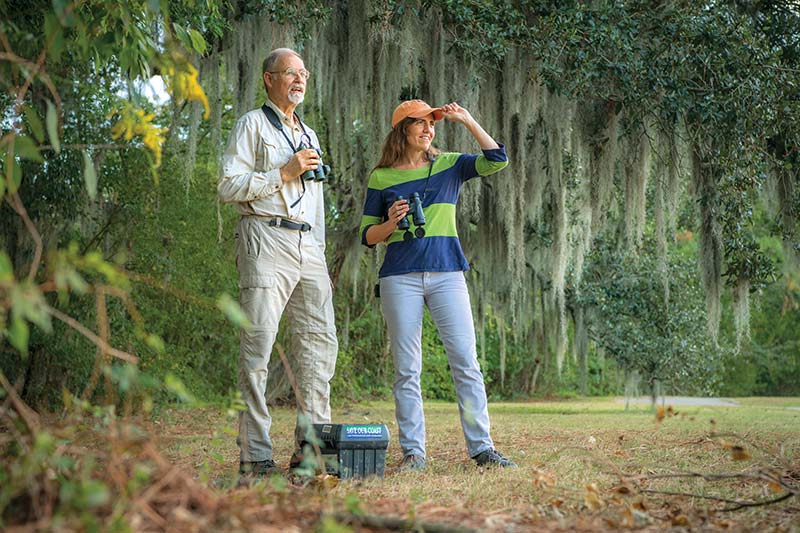 Biology professors Tom Sherry and Donata Henry (G ’05) marvel at the diversity of birds in Audubon Park in uptown New Orleans. Formerly a student of Sherry’s, Henry is now his colleague. (Photo by Paula Burch-Celentano)

In the autumn of 1820, John James Audubon left Cincinnati and headed toward Louisiana, following the great southern migration of birds down the Mississippi River flyway. His journey, part of his effort to create a mammoth pictorial survey called The Birds of America, acknowledged a central reality. Like any skilled observer of the natural world, Audubon knew that the life of birds is inextricably linked to the presence of water. That idea has informed the careers of Tulane faculty members Tom Sherry and Donata Henry, who were recently recognized for their efforts in conservation by the Louisiana Ornithological Society.

During its April meeting in Cameron, Louisiana, the society presented Sherry with its highest honor, the George H. Lowery Award, for his work studying the ecology and conservation of various migrating birds, including the Swainson’s warbler, the American swallow-tailed kite and the American redstart. Henry was one of three recipients of the LOS President’s Award for her conservation research, which includes the creation of the Monitoring Avian Productivity and Survival (MAPS) station at the Pearl River Wildlife Management Area. The station recruits local residents and students to help with research activities such as bird banding.

YARD BIRD LIST OF 155 SPECIES
For Sherry, acting chair of Tulane’s Department of Ecology and Evolutionary Biology, the connection between Louisiana’s varied bird life and its abundant water features is clear. “Besides Louisiana with all its wetlands supporting some of the biggest and most diverse populations of water birds—wading birds, shorebirds, waterfowl, etc.—the Mississippi River is also a major flyway for birds in the fall and spring, probably because it provides such an obvious, conspicuous north-south landscape feature,” Sherry said. “We see fantastic migratory bird populations in the fall and spring, anywhere near the river. That’s one reason why my yard bird list has so many different species on it.”

Want to keep reading? Click here for the full article.

Danny Heitman, a columnist for The Advocate newspaper and a frequent contributor to national publications, is the author of A Summer of Birds: John James Audubon at Oakley House.

This article originally appeared in the December 2016 issue of Tulane magazine.