Chemistry faculty members Brent Koplitz (left) and Mike Herman (right) congratulate Zhiqiang Mao (center), the Nicholas J. Altiero Professor in the Department of Physics and Engineering Physics, who received the Outstanding Researcher Award from the School of Science and Engineering on Thursday (April 6) for his research on quantum materials. (Photo by Paula Burch-Celentano)

At the 11th annual School of Science and Engineering (SSE) Research Day on Thursday (April 6), the college presented its Outstanding Researcher Award to Zhiqiang Mao, the Nicholas J. Altiero Professor in the Department of Physics and Engineering Physics.

Mao’s research focuses on quantum materials such as superconductors, magnetic materials and topological materials. He joined Tulane University in 2002.

The Outstanding Researcher Award recognizes achievement in the quality and quantity of publications, research funding, and contributions to graduate education, among other criteria. During the ceremony, Mao outlined his research efforts and discussed the relevance of quantum materials to the development of future information and other technologies. SSE dean Nicholas J. Altiero presented the award.

“SSE Research Days affords the opportunity [for students] to also present their work to scholars in other disciplines.”

Student researchers were also honored at the ceremony. SSE students and postdoc fellows presented posters on a variety of subjects. The top undergraduate honor went to Kaeli Vandemark, a neuroscience major, whose work in the lab of assistant professor of pharmacology Ricardo Mostany gave rise to her project, “Age-related changes in dendritic spine volume and morphology after sensory stimulation in the primary somatosensory cortex.”

Vandemark’s project was also recognized in this year’s Health Sciences Research Days; she received the Dean of the School of Science and Engineering Award for Excellence in Research and Presentation by an Undergraduate Student.

SSE associate dean Janet Ruscher explained the significance of Research Days. “Throughout the year, students present at research conferences in their own area. SSE Research Days affords the opportunity to also present their work to scholars in other disciplines — for example, an earth scientist may be able to explain her work to a chemical engineer, or a physicist may explain his work to a psychologist. Scholars sharing what they are doing and why it is important — across disciplines — is a quintessential illustration of what the School of Science and Engineering is all about.”

Like this article? Keep reading: No problem is too big for Tulane students to solve 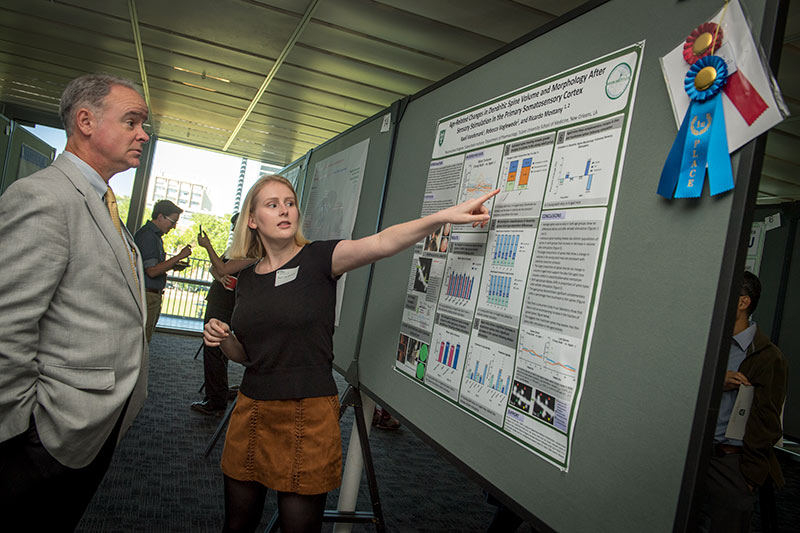