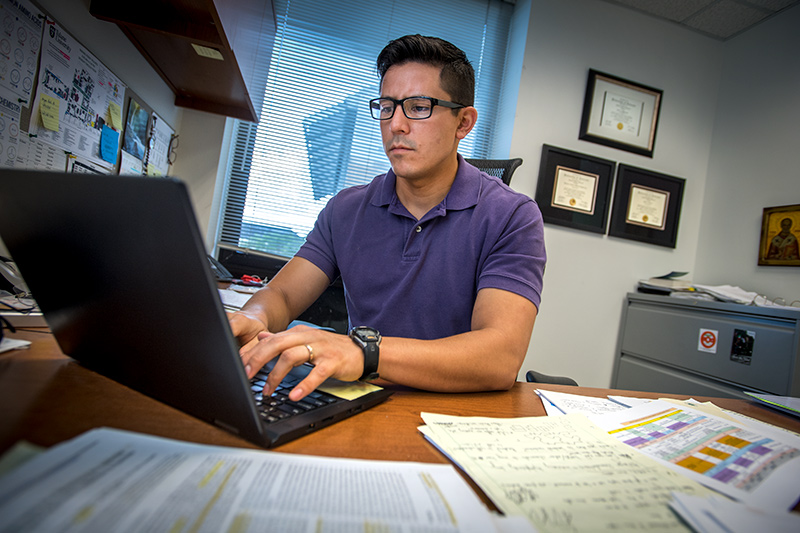 Nicholas Sandoval's lab at Tulane works on the development and application of advanced synthetic biology tools for microbes and other model cell lines for the purpose of therapeutics and sustainable fuel and chemical production. (Photo by Paula Burch-Celentano)

Nicholas Sandoval, an assistant professor of chemical and biomolecular engineering at Tulane University, is the recipient of a National Science Foundation Early Career Award.

The $507,000 award will allow Sandoval and his team of graduate students to continue their work on a type of bacteria with potentially important applications in biofuels, carbon capture and cancer treatment.

The bacterium, called Clostridium, is able to produce butanol from sugars derived from agricultural waste such as corn cobs, stalks and husks.  A major problem, however, is that the sugars are commonly accompanied by chemicals that inhibit the growth and metabolism of the cells, thus reducing biofuel productivity and yields.

Sandoval aims to engineer tolerance to these chemicals to improve biofuel production.

“To do this successfully, my lab is developing new genetic tools and methods that will make engineering these bacteria much easier,” he said.

He said it will involve making slight changes to a genetic editing process called CRISPR, enabling his team to rapidly identify the genetic underpinnings behind observable traits such as tolerance to inhibitory chemicals.

In addition to his research, the NSF Career Award includes an educational component that will enable young faculty to become teacher-scholars and more undergraduates to conduct research. That research will include the start of an International Genetically Engineered Machine (iGEM) team.

IGEM teaches students synthetic biology through research at the high school and undergraduate levels. Each fall, the organization holds a competition consisting of multidisciplinary teams that work throughout the summer building genetically engineering systems using standard biological parts called BioBricks.  Examples include systems that detect heavy metals in wastewater using bacteria, construction of DNA that is compatible across many species of bacteria and new methods of degrading keratin.

Sandoval said his goal is to create a team comprised of undergraduate students from Tulane and Delgado Community College.

“While Tulane and Delgado are just four miles from each other, the respective student bodies do not commonly co-mingle,” Sandoval said. “We hope that by creating a hybrid team we can create a highly diverse environment with a wide breadth of perspectives.”