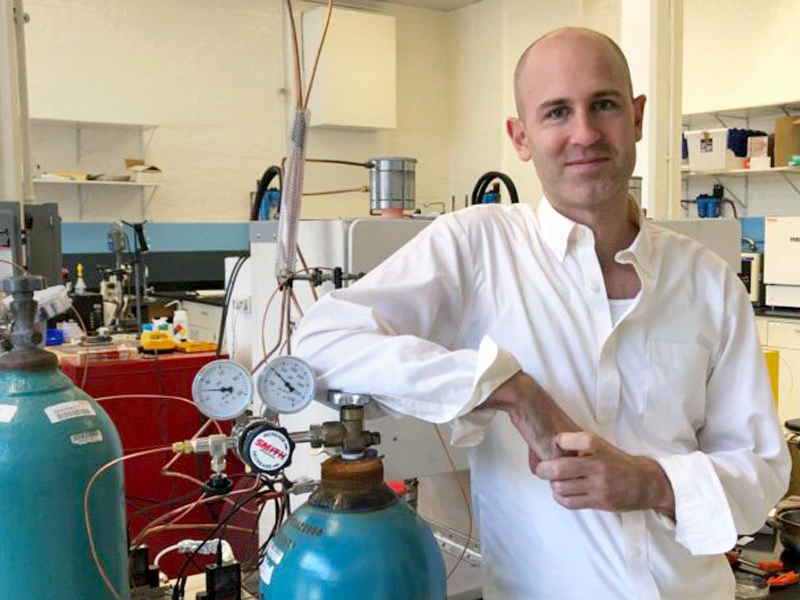 Colin Jackson, a researcher in the Tulane University School of Science and Engineering, has won a National Science Foundation Early Career Award to further his research on the chemistry of planets.

The $700,000 award will enable Jackson and his research team to conduct experiments to investigate the chemical reactions that occur in subduction zones, the locations on Earth where two tectonic plates converge.

“This tectonic environment is especially important because it’s where explosive volcanoes primarily form, where the largest earthquakes occur and where continental crust is formed,” said Jackson, an assistant professor in the Department of Earth and Environmental Sciences.

Jackson’s research will center around subduction zones, which are considered fundamental engines for chemical reactions in the Earth.

“In a subduction zone, one tectonic plate dives beneath another and is heated during its descent into Earth’s deep interior,” Jackson said. “With heat, the hydrous minerals in the down-going plate breakdown to produce water-rich fluids. These fluids are buoyant and rise back to the surface, driving chemical reactions along their path.”

As part of the award, Jackson will develop curricula to better engage high school students in STEM. Specifically, he will create an introductory planetary science class that will be offered through the Tulane Science Scholars Program, which invites a cohort of 150 southern Louisiana high school students to take a STEM class over the summer for college credit.

Jackson and his team will also revamp the Earth Materials class at Tulane, introducing students to a wide range of analytical techniques commonly applied within geochemistry. In addition, the award will enable Jackson to provide training for three PhD students in materials synthesis and materials characterization techniques. Undergraduate students will be recruited from the New Orleans metro area to join in the research efforts.