Time & Location:  All talks are on Thursdays in TBA at 3:30 pm unless otherwise noted.  Refreshments in Gibson 426 after the talk.

Nonlinear dispersive equations model wave propagation phenomena for many physical systems, from water waves to quantum gases. For the last few decades, research on these equations has centered around questions on the existence of solutions, their long time behavior, and the possibility of singularity formation. Fundamental progress has been made in many settings, yet in some regimes, the nonlinear interactions overwhelm the dispersion of the waves, and standard methods break down.

In recent years, probabilistic tools have been instrumental in analyzing the behavior of these equations in previously inaccessible regimes. This approach, which goes back to the seminal work of Bourgain in the 90s on invariant Gibbs measures for Hamiltonian PDEs, has opened the door to new and exciting questions in a variety of settings. In this talk, we will give a general overview of the progress in this area and discuss some of the topics of current research.

A major reason for cancer treatment failure and disease progression is the heterogeneous composition of tumor cells at the genetic, epigenetic, and phenotypic levels. While tremendous efforts have tried to characterize the makeups of single cells, much less is known about interactions between heterogeneous cancer cells and between cancer cells and the microenvironment in the context of cancer invasion. Clinical studies show that cancer invasion predominantly occurs via collective invasion packs, which invade more aggressively and result in worse outcomes. Using non-small cell lung cancer spheroids, we show that the invasion packs consist of leaders and followers.  In vitro and in silico experiments show that leaders and followers engage in mutualistic social interactions during collective invasion. Many fundamental questions remain: What is the division of labor within the heterogeneous invasion pack? How does the leader phenotype emerge? Are phenotypes plastic?  How do the invasion packs interact with the stroma? Can the social interaction network be exploited to devise novel treatment strategies? I will present the recent experimental and modeling efforts that try to address these questions. I will try to convince you that analyzing this social interaction network can potentially reveal the ‘weak-links’, which when perturbed can disrupt collective invasion and potentially prevent malignant progression of cancer.

Title: The Sumner-Ernst Tangle Model: An Application of Topology to BioChemistry

The tangle model was developed in the 1980’s by professors DeWitt Sumner and Claus Ernst. This model uses the mathematics of tangles to model protein-DNA binding. An n-string tangle is a pair (B,t) where B is a 3-dimensional ball and t is a collection of n non-intersecting curves properly embedded in B. N-string tangles are formed by placing 2n points on the boundary of B, and attaching n non-intersecting curves inside B. Tangles, like knots and links, are studied through their diagrams. In this model for protein-DNA interaction, one is required to solve simultaneous equations for unknown tangles when the product of these interactions are DNA knots and links. This discussion will give a review of the tangle model and will include important biological and mathematical definitions.

Title: Waves and solitons: the case of a Korteweg-de Vries solitonic gas

Abstract:
N. Zabusky coined the word "soliton" in 1965 to describe a curious feature he and M. Kruskal observed in their numerical simulations of the initial-value problem for a simple nonlinear PDE.The first part of this talk will be a broad introduction to the theory of solitons/solitary waves and integrable PDEs (the KdV equation in particular), describing classical results in the field. The second part will focus on some new developments and growing interest into a special case of solitons defined as "solitonic gas" or "integrable turbulence". In particular, I will talk about a recent work where we want to study the asymptotic behaviour (for large time and for large space parameter) of such type of solitons. We will achieve our results by first framing the problem in the setting of a Riemann--Hilbert problem and then by rigorously analyzing it using the powerful technique of nonlinear steepest descent.

This is a joint work with Fang-Ting Tu, Noriko Yui and Wadim Zudilin. Most of the talk is accessible to graduate students.

Organisms exploit resources to persist, compete with other organisms for survival, and sometimes evolve themselves to adapt to changing environment. In this talk several partial differential equation models from spatial ecology will be discussed, aiming to understand the role of movement in population dynamics.  The mathematical findings, partly based on game theoretic approach, are closely related with the biological theory of ideal free distribution.  The talk will be accessible to general audience.

Aedes Aegypti, a mosquito that transmits Zika, Dengue and Chikungunya, form nearly stationary clouds.   One may be interested in mapping these hotspots.   Suppose that humans go about
their regular life with a GPS tracking their movement (ie, carry a cell phone).  When they show up at a hospital, they are diagnosed with Zika, or not, and their GPS traces are downloaded.

This talk presents a framework to do a tomographic reconstruction of the hotspots.  A challenge is that paths are complex.  The theory of reproducing kernel Hilbert space can guide
our approach.   We will compute empirically the difficulty of the reconstruction and identify the "well-posed questions in this ill-posed problem". 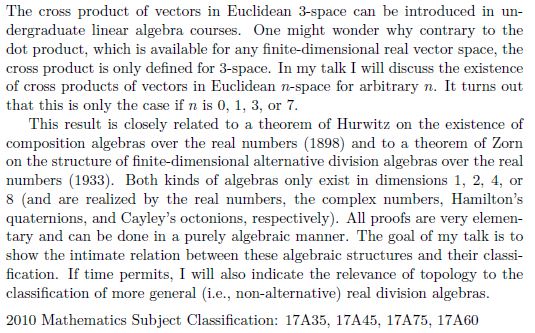 An analytic singularity is given by (convergent) power series, while algebraists prefer to study polynomial equations. In 1956 Samuel bridged this gap and showed that an isolated hypersurface singularity is preserved by taking a long enough (Taylor) truncation of the defining power series. Numerous authors extended this result and it still remains a topic of active research. In particular, it is now known that isolated singularity is a necessary assumption, thus we must study a weaker question: what properties can be generally preserved by a long enough truncation?
I will present results from my joint paper with Thomas Polstra that studied this question for Hilbert-Kunz multiplicity, a number that measures severity of a singularity.

Advances in genome sequencing technology are generating genetic data at an ever-increasing pace.  This burst of data provides opportunities to look at the underlying biological processes that generate evolutionary patterns. However, these opportunities are accompanied by both statistical and computational challenges that require scalability for both modeling with large state space and inference with large amount of sequences.  In this talk, I will discuss our attempt for scalable modeling with an example of incorporating interlocus gene conversion into existing phylogenetic substitution models that previously only consider point mutations.  I will then introduce our linear-time gradient algorithm and its associated scalable inference techniques with an example of inferring the branch-specific evolutionary rates of large-scale datasets of fast-evolving pathogens under a mixed-effects model.  With previous approaches, these inferences would have been computationally intractable.

Title: Analysis and combinatorics: through a number theoretic lens

The Riemann zeta function is one of the central objects in number theory, due to its close relationship with prime numbers. In this talk, we discuss this function and its connections with analysis and combinatorics. Assuming the Riemann Hypothesis (RH), it can be shown that the zeros of any fixed order derivative of the completed Riemann zeta function also lie on the critical line. However, not much is known about the vertical distribution of the zeros, even if we assume RH. The study of this distribution is the objective of the first part of the talk. For the rest of the talk, we discuss how this study can be used to obtain results about combinatorial objects such as number of restricted partitions of a positive integer. Asymptotics for the number of ordinary partitions were first studied by Hardy and Ramanujan.

The aggregation-diffusion equation is a nonlocal PDE driven by two competing effects: local repulsion modeled by nonlinear diffusion, and long-range attraction modeled by nonlocal interaction. I will talk about how this equation arises in modeling the collective motion of cells, and discuss several qualitative properties of its steady states and dynamical solutions. Using continuous Steiner symmetrization techniques, we show that all steady states are radially symmetric up to a translation. (joint work with Carrillo, Hittmeir and Volzone). In a recent work, we further investigate whether they are unique within the radial class, and show that for a given mass, uniqueness/non-uniqueness of steady states are determined by the power of the degenerate diffusion, with the critical power being m = 2. (joint work with Delgadino and Yan.)